How many suppliers should I have in a reverse auction?

A few years back we did some work with Oxford University. They were interested in how procurement auctions fitted into the bigger auction picture. We were interested in finding out how in line with auction theory we were. I was looking through my old material from that study and I want to share a neat graph from that work that models how expected savings rise the more suppliers you include in an auction. 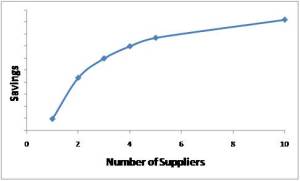 If you assume that all suppliers in a marketplace have a price evenly distributed between a low price and a high price then, on average, the savings you would get increase as shown in the graphic above. This helps emphasise that 4 bidders is a good number for a reverse English auction, as I have often said. But one thing to clarify: this is a model – you can do better than the model by ensuring that when you select potential suppliers that you are selecting suppliers who have a lower price rather than selecting suppliers at random from the marketplace.

One response to “How many suppliers should I have in a reverse auction?”

This site uses Akismet to reduce spam. Learn how your comment data is processed.