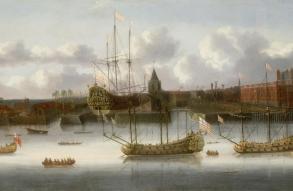 The Company of Merchants of London trading into the East Indies was founded in 1600 as a scrappy startup trying to disrupt a spice trade dominated by the Dutch. Over the next two centuries it evolved into a solid financial performer, a regulated monopoly and then into a branch of government.

Please put aside for the rest of this post any concerns about the various and many reprehensible things done by, or in the name of, this company. Just look at it from the perspective of what it can tell us about growing and evolving a business.

Turns out that plus ca change. Much of what we obsess about in the world of startups today would be very recognisable to an observer in the 1600’s. In the 21st Century how companies get created and develop is not all that different to 400+ years ago. Shouldn’t be surprising as ultimately we are still people and people haven’t changed all that much over the centuries.

The quotes below are from John Keay’s The Honourable Company.

On being an early stage investor

The first voyage didn’t live up to founder or investor expectations but it was a pretty impressive feat nonetheless. Now there’s a sentence that could easily apply to every MVP I’ve seen. It set out in 1601 in search of the spice islands and their cloves. Didn’t quite make it but managed to return in 1603 with plenty of pepper.

[T]he 218 petitioners who in 1600 had become the Company of Merchants of London trading into the East Indies had subscribed for only one voyage. The majority now wanted their money back; they were not amused when instead they were told that for every £250 they had subscribed, £200 must be reinvested in a second voyage. (p25)

Same lesson applies today to any early seed investor. Make sure you’ve kept enough money aside for a top-up later on. Whatever you put in now won’t be enough.

On the importance of dog-fooding

England had one huge commodity at the time: wool. The Company was desperate to find a market for wool and thought that Japan might be a good bet. Unfortunately not so. Keay quotes John Saris, leader of this expedition who in 1613 wrote that:

The natives were now more backward to buy than before because they saw that we ourselves were no forwarder in wearing the thing that we recommended to them. ‘For’, said they, ‘you commend your cloth [wool] unto us but you yourselves wear least thereof, the better sort of you wearing silken garments, the meaner fustians [made from cotton] (p58).

Product Managers take note: use your product and be seen to use it 🙂

On the roller-coaster of investing in a growth stock

On becoming a solid financial performer

If the 17th Century was about a scrappy startup trying to figure out its business model, in the 18th Century the bean counters took over.

By 1710 it was regularly sending to the East ten to fifteen ships a year, each of around 300 tons… Thirty years later the number of sailings had risen steadily … to around twenty, each ship being usually of 490 tons. (Over 500 tons and the ship’s company had to include a chaplain.) … Naturally prices and profits fluctuated but there was none of the erratic boom and bust so typical of the previous century. Shareholders came to expect their annual 8 percent dividend and when in 1732 it was proposed to reduce it to 6 per cent there was such an outcry that the directors had to think again. India stock had become the eighteenth-century equivalent of a gilt-edged security, much sought after by trustees, charities and foreign investors. (p220)

Interesting to see the emphasis move from capital appreciation to income generation.

On dealing with the haters

Naturally success breeds detractors and the Company had plenty of those. From a 21st Century perspective it’s really interesting to see 17th Century people struggling with trying to make sense of international trade. When the first voyage returned in 1603 it faced some hostility back home: “Already there were those who failed to see how exchanging precious bullion for an inessential condiment like pepper could possibly be in the national interest.”(p24).

One recurrent criticism … was that the Company must be impoverishing the nation since it exported treasures and imported only luxury items. In the case of Indian cottons these were manufactured goods which must be killing off English manufactures… But in 1620 Thomas Mun, a director of the Company, met … objections in his Discourse of Trade unto the East Indies. Mun argued convincingly that there was nothing inherently wrong with exporting precious metals provided that values of such exports was less than the value of the imported goods. ‘For let noe man doubt that money doth attend merchandise, for money is the price of wares and wares are the proper use of money, so that coherence is inseperable.’ (p119)

We may not be so worried about exporting gold any more. But there are plenty of similar debates about trade vs. protectionism still going on.

Robert Clive, already a powerful presence in the Company, was sent from England to run their interests in India in 1764. He was so excited at the opportunities he found that he “gave instructions for ‘whatever money I may have in public funds or anywhere else and as much as can be borrowed in my name’ to be invested in Company stock.” (p376)

Clive was massively over-optimistic about what he could deliver. The huge annual surplus he foresaw was “sweet music to the ears of the directors” and when news of these predictions reached London in 1766 they had a profound effect on Company stock.

[T]he Company’s stock, a normally unexciting performer on the financial markets, suddenly began to climb. It added …. about five percent in a single day and it went on climbing, nearly doubling its value over the next eight months. Clive’s friends …. bought heavily; but as word of his optimistic calculations … leaked out, outside investors also leapt on the bandwagon. On the Amsterdam and Paris markets the bubble went on growing and as the wilder speculators moved in, the greater became the pressure to keep the bubble from bursting.

An obvious way of preventing such a catastrophe was by boosting confidence still further with a hefty increase in the annual dividend … Accordingly, in September 1766, the General Court of Proprietors moved from an increase from six to ten percent… As a result, stock values continued to climb. (p378)

Turns out he had been massively over-confident and the stock price crashed later on. But just goes to show much people have always been driven by story telling and their animal spirits.

And finally, on how to eventually turn philanthropist

Of those who remained in the Company’s service the American-born Yale brothers proved the shrewdest operators. In the late 1680s Thomas Yale handled their affairs in Siam while Elihu Yale maximised their profits as Governor of Madras. Eventually both attracted the Company’s censure and were dismissed for abusing their positions. Elihu was not, however, disgraced and … he was able to retain his Indian fortune. Part was donated to his old school, then known as His Majesty’s College of Connecticut. In 1718 the grateful trustees renamed it ‘Yale College’ in his honour. (pp199-200)